Things you didn’t know were Toxic for your Pet

This time of year we brighten our homes with all kinds of decor, lights, and festive plants. We cook rich meals and sweet desserts and family and friends fill our homes. It’s easy to lose track of our furry family members in the hustle and bustle of the season. However, it’s more important than ever to pay attention to what new dangers are within your pet’s reach and make sure they are safe this holiday season. Here are a few new dangers that may be around this time of year:

Most people have heard that poinsettias are extremely toxic and dangerous for our canine and feline friends. It is true that ingesting some of the plant can cause a lack of appetite or stomach upset for 1-2 days.  However, surprisingly, it doesn’t normally need medical intervention unless lasting longer. No significant toxicity is typically seen or has been documented. The poisonous poinsettia is a myth.

Unlike poinsettias, lilies are very dangerous to our four-legged friends. One or two bites of lily can result in severe acute kidney failure in cats and the pollen and water the plant is in is also potentially toxic. Holly berries can cause severe GI upset due to the spiny leaves containing potentially toxic substances. American mistletoe is less toxic than European varieties. Mild GI signs can be seen but if large amounts are ingested it can cause collapse, hypotension, ataxia, seizures, and even death.

Cats and dogs alike will see decorations and shiny new things in their environment and think Christmas has come with plenty of new toys for them and new toys immediately go in their mouths. Eating these can cause foreign body issues and blockages from ingestion. Usually needing surgical intervention.

The smells this time of year are wonderful and nostalgic. However, if a curious cat or canine decides it smells good enough to eat the repercussions could be very dangerous. Ingesting heated oils can cause serious chemical burns in the mouth, fever, difficulty breathing, and tremors in cats. Dogs have not been seen to be as sensitive but it’s better to be safe than sorry.

Grapes in all their varieties should not be given to dogs. They have been found to be toxic and can cause acute kidney failure. Signs of toxin ingestion can include:

Chocolate and cocoa contain theobromine which is similar to caffeine and toxic to cats and dogs. The darker the chocolate (higher the cocoa content) the more theobromine is in the sweet. Ingesting this can cause vomiting and diarrhea, seizures and heart arrhythmias.

Many sugarless gums and candies contain xylitol which is toxic to dogs. Ingestion of xylitol causes a life-threatening drop in blood sugar and liver failure.

With slippery sidewalks and roads prevalent in the winter months more ice melting and salt is spread. Ingesting the salt-based products can cause an upset stomach and external exposure can cause dermal/paw pad irritation. Large amounts can cause electrolyte abnormalities due to the sodium content and result in seizures and brain damage.

Antifreeze is found more readily in winter months in places we expect like cabins to keep pipes from freezing and others that we may not, such as in some imported snow globes. Ingesting just 1 tsp for cats and 1-2 tbsp for dogs can be fatal. Early signs of ingestion include acting drunk and uncoordinated, excessive thirst, and lethargy. Ultimately this leads to acute kidney failure.

While inviting Fluffy or Fido to join in the party might sound like a good idea, it could have a dangerous outcome. Alcohol can cause seizures, kidney and liver damage.

So be aware of what your sneaky, furry friends can reach this holiday season. If you notice any of the signs mentioned above or suspect they got into something toxic contact your veterinarian right away. Let’s all have a happy holiday! 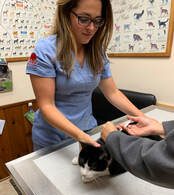 ​Microchipping your Pet: Why it’s important

By dodgeville Cats, Dogs No Comments

There is a surprising amount of misunderstanding surrounding pet microchips and why it is an important part of keeping your pet safe and healthy. It’s easy to assume you will never need to use one for your pet because they are always with you or never go outside without a leash. But the adage “Never say never” could not be any truer than when it comes to pets.

The statistics of lost pets in the United States are scary to look at. According to multiple studies, most pets that go missing never find their way home. According to one study published in the Journal of the American Veterinary Medical Association only 22 percent of lost dogs that entered animal shelters were returned to their owner. That’s barely over 1 in 5 dogs finding their way home from the shelter. Lost cats in that make it to an animal shelter have an even bleaker outlook. Less than 2 percent of them are reunited.

However, this study found that microchipped pets have a far greater chance of making it back home. Over 52 percent of microchipped dogs and 38 percent of microchipped cats are reunited with their families from the shelter. Another study found that an owner’s efforts to find their dog results in a recovery rate of only 13 percent. However, when a microchip is detected at an animal shelter the rate of return to owners jumps drastically to 74.1 percent.
​
Microchips help bring lost pet’s home but what are they and how do they work? The chip itself is tiny enough that getting it implanted doesn’t require anesthetic. It is like getting a routine vaccine. The microchip is placed just under the skin between the shoulder blades.  The only information stored on the microchip is a unique identification number that when looked up in a database can identify your pet. The microchip is not a GPS chip so it cannot be used to locate your pet and it also does not store your personal contact information. The contact information that is given when registering the pet’s microchip is only given out when the veterinary service or shelter calls the pet recovery service after scanning a microchip.
Getting your pet microchipped is a great first step in making sure they always find their way home. Making sure to keep the contact information up to date with any new addresses and phone numbers will ensure that if your pet ever does get lost whomever finds them is able to get them home.

Do I really need to vaccinate for that?

Vaccines have become a hot topic in recent years as fear of whether there are negative effects or a possibility of over-vaccinating. Obviously, we all want to keep our pets happy and healthy and help them live a long life. But with all the different information out there it can be hard to decide what vaccinations are worth giving and why.

Two Categories
When talking about vaccines for our pets there are two categories we need to explore: core and non-core. Core vaccines are those that are considered vital to all pets where as non-core vaccines are often recommended based on risk of exposure in your area, lifestyle of the pet, or other variables.

For dogs the distemper combination vaccine, often listed as DAPP or DHPP, and rabies are considered core vaccines. For cats the feline distemper combination, often listed as FVRCP, and rabies vaccines are considered their core vaccines. The risk of exposure, severity of the disease, and/or the transmisibility to humans has been found to warrant all cats and dogs be vaccinated against these diseases.

Beyond the core vaccines there are many non-core vaccines that can be given based on the geographical area you live in, lifestyle of the pet, and other variables that would be discussed by your veterinarian. For dogs these can be vaccines against Bordetella (commonly called kennel cough), Leptospirosis, Lyme disease, and Canine Influenza. For cats non-core vaccines include feline leukemia, Chlamydophila felis, Bordetella, and feline immunodeficiency virus.

When/how often do I vaccinate?
The American Animal Hospital Association (AAHA) Canine Vaccination Guidelines Task Force and the American Association of Feline Practitioners are made up of veterinary care related professionals with extensive experience. These groups have released vaccination guidelines with their evidence-based  recommendations for vaccination timelines. Below are links to their vaccination recommendations:
https://www.aaha.org/public_documents/guidelines/vaccination_recommendation_for_general_practice_table.pdf
https://journals.sagepub.com/doi/pdf/10.1177/1098612X13500429

By discussing with your veterinarian your individual pet’s risk and lifestyle as well as learning the exposure risk in your area, as a team you can make a vaccination plan that keeps your furry friends healthy and happy. 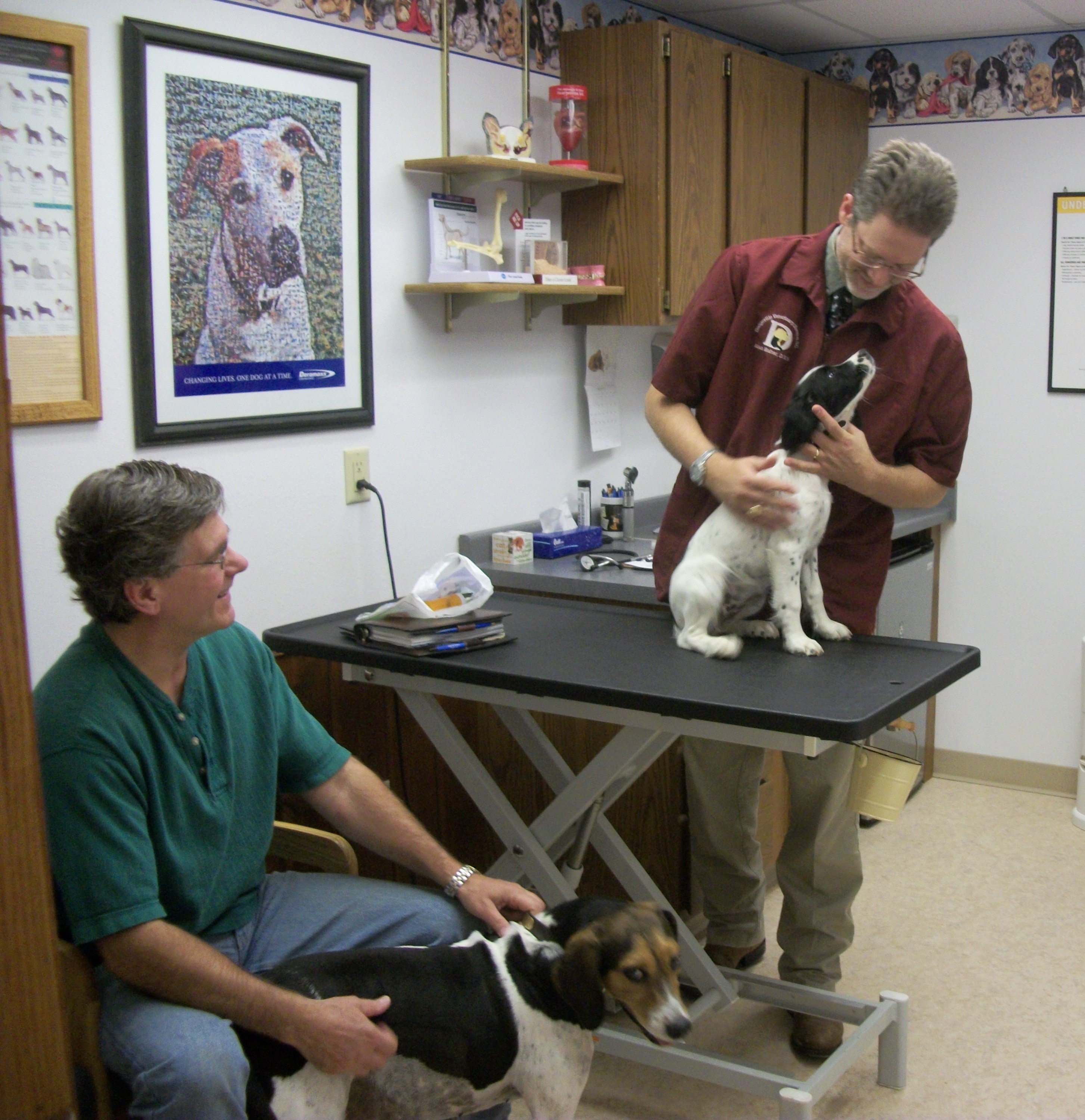 Fear Free Certified: But What Does That Mean?

By dodgeville Cats, Dogs No Comments

Many of our team members are Fear Free certified and we are very proud of that. But what does that really mean for you and your pet?

Fear Free training is a continuing education opportunity for professionals in the veterinary field. Founded by Dr. Marty Becker, DVM, their mission is to “prevent and alleviate fear, anxiety, and stress in pets by inspiring and educating the people who care for them.”

Our Fear Free certified team members have completed training that has shown them the best ways to approach, handle, and treat your pet to not only make the visit less stressful but maybe even something to look forward to!

We have taken the Fear Free approach and built many of our standard procedures around it! We consider the experience of visiting our clinic from the perspective of each pet that visits. By providing a calming atmosphere with pheromone bandanas, quiet and relaxing rooms and waiting areas, and friendly staff each pet can have the best opportunity to have a low stress and positive visit.
​
We are so happy to be able to provide a Fear Free experience to your furry family members. If you are looking for resources to continue Fear Free practices at home here are links to Fear Free and Dr. Marty Becker’s blogs:
https://fearfreehappyhomes.com/blog/
https://www.drmartybecker.com/blog/ 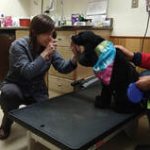 We Are AAHA Accredited